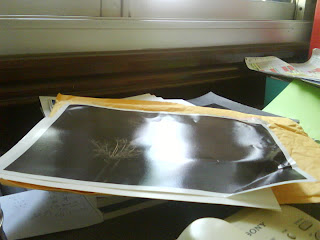 I am not sure why I am so disappointed about this. I bought a photograph from a talented young photographer. It started as an idea just to help her out as she was trying to get rid of old stock, and (I felt) needed the support, but I soon began to look forward to owning the striking image I had chosen. There was a bit of fuss at first as she noticed that the photo had a minor flaw but she was very thoughtful and reluctant to send it and so had another copy made for me which impressed me. However when the photo arrived, as you can see from the picture above, it was totally wrecked.

What irks is that it had been posted in a bubble wrap padded envelope with no supporting card. How can someone who is so proud of their art be so negligent? The image needed to be protected in tissue and at least an unbendable cardboard sheet slipped in, if not a slim box.

The fact that she wouldn't send out a flawed print, shows she clearly cares deeply about her work, but her unwillingness to take full responsibility for ensuring it arrived safely in my hands demonstrates possibly she has a some things to learn. When I told her about the damage (which in my eyes is complete - the image is beautiful, but this version of it is destined for the bin) she apologised and said maybe international post was "mean" as she hadn't had any problems sending work across the States in a padded envelope. Not an American problem, an international one, and therefore mine.

November 21, 2016
Today I am getting up close and personal with my self-help habit.  I have been looking for answers for years but seem no closer to finding them than when I first began to look.  Could it be that the search is futile?

September 05, 2018
I was wondering, if you once blogged regularly do you always long for it? Time and time again I am drawn back to Imagine the North, although sadly - as the many false restarts will attest - I seem unable to capture the former magic.  I guess we have moved on (and away) from blogging.  The closest thing I have to it is Instagram.  Like ItN my Instagram account provides me of diary of partial highlights; but still, I miss the text, the insight (my own insight gained through the act of putting a thought into words, a small concept with a beginning, middle and end) and the comments from friends.

Can the US election make me a better person?

Everyone is talking about it but I hope I am bringing a new perspective to the table, albeit a very personal one .