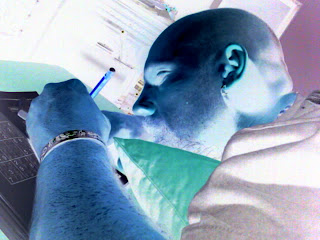 (Don't panic, this isn't a post about Dom - I just used his negative image as a visual metaphor, he is one of the least negative people I know - in fact this is about me learning to be more like him.)
Negativity is traditionally a stage in a process rather than an outcome in itself. It has value, but it is rare to see it replace positivity as a final product. As a negative is a developmental step in photography, negativity is a developmental step in the evolution of the psyche. In the growth of who we are.

Sadly it is a rather addictive step and one I am only just starting to understand. I have recently had reason to reflect on this because I have noticed a couple of important relationships in my life have been based, to a varying degree, around negativity. The common ground was dislike of people or situations (and the pleasure derived from dwelling on and examining that dislike) and we (I and the two theys) were equally culpable, co-dependent even, in our negativity. Oh yes, occasionally one or other of us would make a break for the fresh air and sunlight of a positive outlook but the other would be sure not to let too many days pass before we dragged our newly optimistic partner back into the slough of despond.

But as alluring as this addictive form of relationship is, I can no longer make a place for it, at least when we have through neglect allowed the negativity to become the only common ground. Negativity is as ugly and poisonous as smoking (another addictive old friend whose time passed). If the relationships can't survive the transformation to positivity they aren't worth it and I won't mourn their loss.

As it stands now, although I have hope for both relationships, one I believe will survive and grow stronger and one I am afraid won't. I am not sure why that is so - maybe in one the negativity was an aberration while in another it was all we had. Maybe I sense one friend is just as sick of me of the taste of negativity whilst the other is not yet ready to give up their fix.