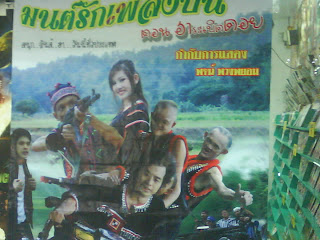 I remember my first night in Thailand. I had come with my then future but now ex husband for a two-week holiday from Singapore to meet his family, his country. I stood in the window of our Bangkok YMCA hotel room (it was almost classy 16 years ago) looking out onto a busy, pre-skytrain Sathorn Road, crammed with gaudy taxis, tacky billboard ads for M150, beggars on footbridges, the ugly mess of tangled wires and I said, "promise you will never ask me to live here".

Three years later we moved into an apartment across the river in Lardya, Thonburi. Our apartment block was next door to Thonburi comedy cafe and I think most of the other inhabitants were hookers. We lived in a box with a bed, a toilet and a balcony that we could take it in turns to stand on. Noi bought us a little t.v. that I watched but couldn't understand. I remember being mystified by a segment of a comedy show that appeared to revolve around a transgendered juggling dwarf. I expressed my (finely trained) western scorn and Noi did his best to explain why it was funny. I didn't get it.

I hated Thailand for almost four years and then one day I woke up and realised I was in love with it. The ugly mess of tangled wires and tacky billboard ads for M150 had become invisible. The gaudy taxis filled the streets with rainbows and I didn't need anyone to explain to me why transgendered juggling dwarves were funny. To clarify, they still didn't amuse me, but the world had expanded and there was plenty of room for those who found dwarves (and other birth defects) funny and I to co-exist.

About that time a woman I loved decided to return to the UK with her husband and son after about 7 years in Thailand. She was a friend and hero to me: she had lived in Isarn and spoke Thai fluently. Everyone adored her and she had, until recently, adored everyone. When I asked her why she had decided to leave she said "I have to go before I start to hate it". I didn't get it.

Nine years later. Today. I get it. My connection to Thailand was severed with the divorce. I try to love it with the passion I once had but the best I can manage it lukewarm respect. Yes, it is lovely and diverse, the people can be wonderful, the food is great and living here affords me a fantastic lifestyle. But today I sat in Icon Plaza while Dom was talking to our favourite tech guy, sipping a latte, looking at the film poster pictured above - and I experienced the hot flooding return of scorn for a society that found transgendered juggling dwarves (and other birth defects) funny.