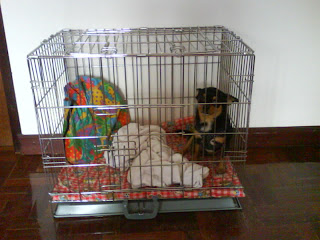 In preparation for moving to the US I have asked for a quote for shipping the animals. The thought of sending them with the movers scares me, I would rather have them accompany us however the thought of arriving in the States with 2 cats and a dog but no home and a 2 day road journey to Minnesota is daunting in the extreme. So I want to know how much my other option is going to cost.

The movers asked for size and weight of animals and dimensions of cage. I just took this picture to see if this cage would be okay. The answer is no, we need to buy new airline compliant cages - I'm cool with that, it is safer.

Anyway, although I only uploaded this from my phone to my blog for convenience (to send the photo to the movers) it got a comment so I will leave it. In fact I will do more than that - I will use the post to answer the question.

Mita goes crazy if you put her in a cage. I sometimes have to put her in one when travelling and she always throws up all over it. It's just too stressful for her.

And an unrelated question: is he yappy? Mat says every single chi...thingy is yappy and that's why he doesn't want one. I'm hoping you'll say he's well behaved and there's no reason why we shouldn't get one;


Spike loves his cage because that is where he sleeps every night, and has done since he was a puppy. If he gets tired when he is pootling around in the day (on the rare occasions we let him do his own thing) he will often sneak into his cage for a nap. He also runs into the cage and sits and waits for a treat after he has 'been' outside.

And he never yaps. If he barks it is for a good reason, to alert us to a possible intruder (the maid - who he adores, the water delivery guy - who he doesn't) or because he has heard another dog bark in distress or anger. But he will bark once or twice and once we acknowledge his voice he is quiet. He never does that pointless endless yapping - but that is because he knows we listen to him. I think Chihuahuas (and all small dogs) are often spoilt rotten at first but neglected later - when the novelty of owning a new baby has worn off. We love him to pieces, but we rarely treat him like a little dog. And from his point of view he is as big as a bear and as brave as a lion... and of course like everyone in our household he has strong streak of wolf in him. RWAAAHHHHRRR!!