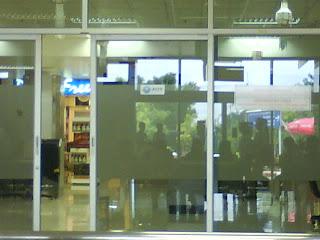 This isn't going to be quite the post I expected it to be when I took the photo. I snapped the doors of Chiang Mai airport's international arrival hall while waiting for Dom to return from his visa run in Malaysia fully expecting to make a post about the joys of reunion.

While I waited I read bits from The Wisdom of Yoga by Steven Cope. I am reading it a second time in the hope that exposure to yoga, even passively, will make my leg feel better; which is a revealing comment in itself about the current poverty of my spiritual and physical health. I was reading about Duhkha, the cycle of suffering that we experience through continual craving, aversion or delusion. The author gives an example of longing for a banana muffin, getting and eating the muffin and mourning the fact that the pleasure is lost as soon as the last morsel passes our lips. There is so much pain around this experience - found in the longing and mourning stages that it is not worth the scant pleasure of eating, especially as we rarely eat with full attention to the pleasure anyway.

This is relevant just wait.

So Dom left on Tuesday and from the moment his taxi drove away I longed for the moment when he returned. Longed. Painfully. I hated every minute away from him. And as far as I know he felt the same. I took a photo of these doors as they were where I would see him first. I didn't want to capture him walking through them - then I would be in joyful reunion mode not blog mode. I wanted to share with you my anticipation.

This could have been titled Anticipation.

It could have been titled Anticlimax.

As I got my first glimpse of him he gave me a big beaming smile but behind that smile I could see tension. "What's wrong love?" I asked as soon as he released me.

And so began the mourning for the moment.

He was tired; he'd been up since 5; his flight was delayed; he'd been given a centre seat; the lazy cabin staff hadn't given out arrival cards and he'd had to queue (or scrimmage) for them upon landing. Not wishing to be outdone I joined in, I bitched about work (I won't elaborate... too many of my readers work with me and don't need to know what I complained about but my list was as long as his). By the time we were sitting in the taxi we were each staring out of the window rather than at each other and getting lost in our individual dissatisfaction with the world and our crappy experience of it.

It was then I realised I had passed the moment I had been looking forward to for 72 hours. It was over. We were together again but instead of celebrating that moment joyfully we had slipped effortlessly back into the trough we have been sinking in for months now.

This isn't a relationship thing, with regard to each other Dom and I are as happy as we have always been - it is just the world we are out of sorts with. We are beyond ready to leave Thailand and held up by things out of our control. Dom especially needs to leave as I have seen him change from a joyful and vibrant embracer of life to an angry and critical grouch.

I won't go into to why we are at this stage right now, this post is long enough. I just wanted it on record. We too have dirty laundry.

Damn, I need a muffin. 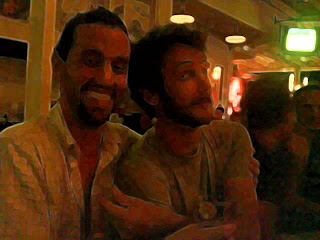 As a teacher you try not to have favourite students and as an Academic Manager you try not to have favourite teachers. If I were the kind of person who was to flout this very sensible guideline and pick a favourite, I could do worse than Rob (pictured, left). He is one of the most talented teachers I have ever had the good fortune to observe, and one of the most laid back and self-reliant staff members I have had the good fortune to... well sit back and watch him not need me.

He also has fab taste in music and cool tattoos, so it is very lucky that any temptation to stick a gold star on his forehead and make it official has been removed by his leaving to go and work in Poland. The staff room at Chiang Mai is a little poorer for his absence, but I am sure the one in Poland is much richer for his presence. Sharing the love is important too, isn't it? Good luck Rob, enjoy life and embrace new experiences.

In other news, this photo was taken in such poor lighting conditions that I felt the need to throw all of my meagre in-phone photo editing skills at it in order to render it even marginally useable. Apart from tweaking the light balance, I added a "painting" filter. I just adore what it did to Max's eyebrows!

Someone to watch over me 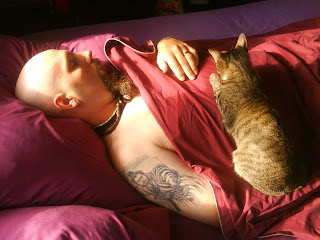 There is nothing like waking a bit earlier than your loved one and watching them sleep to make you realise how blessed you are. It doesn't happen to me very often, I love my bed and Dom usually has to drag me out of it by my feet, but this morning - thanks to a powercut that woke me up and set me worrying about a range of things from the water pump to the third world debt - I got my moment. I also discovered I was not alone in my watchfulness. Lily is very much a daddy's girl and I found her nestled in the crook of Dom's arm, leaning against his chest and enjoying the rise and fall of his sleeping body as the morning sun warmed her whiskers. 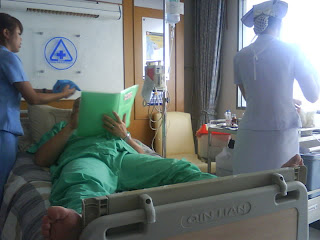 Dom enduring the hardships of hospital life. The nurse on the left places an ice pack on his forehead, the nurse on the right gets ready to take blood samples while he chooses his meals for the rest of the day.

Yeah, Dom got a bacterial infection that had him Chiang Mai Ram hospital for just over 24 hours (the time it takes to absorb 3 bags of saline solution). We were worried for a while that it might be the dreaded H1N1, after a night of fever and chronic diarrhea, alarming blood pressure and high pulse rate. The doctor however reassured us that it was probably bacterial and once in hospital tests confirmed that. He was badly dehydrated though which is why they opted to keep him in. Luckily I got to stay with him as Thailand hospitals are very reasonable and our health insurance allowed him to have his own "VIP" room on the international ward though, as you can see from the picture, the bed is Thai sized. Poor baby.