Hey lady, can I have my balls back please? 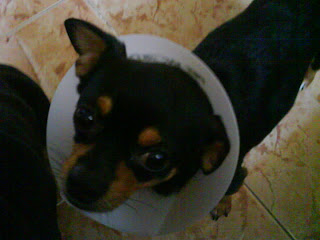 When we got Spike we always intended to neuter him. With the cats it had been a quick and simple decision having watched them endure several apparently agonizing 'seasons' with the attendant weight loss and yowling we had them both spayed quite young. However Spike got to the snipable age, and yet we delayed. Why?

Well he seemed to enjoy his balls, hours were dedicated to licking them - and apart from a tendency to mark his territory unless watched closely his sexuality was never troublesome. He didn't hump legs or furniture and was happy with an occasional romantic evening with Twist, his love puppy. Additionally one of the things we treasure about him is his attitude - if we cut off his balls, might he be a bit less, well - ballsy?

Then our vet, Chotana Pet Hospital, announced a half price neutering deal for the month of September, and obviously it was too good to miss. I had Spike booked in within hours of the announcement and 1st September was his big day.

Last night, after spending the evening with a sad and sore post-op babydog, I went to bed in tears having decided I had done a terrible thing. Okay so it is almost certainly healthier, and yes it is more convenient (for us at least); but the sense that my decision had been predominantly economic, and in making such a decision I had taken something that was not mine to take, was unbearably heavy. Why do I soul search so? Why didn't I feel this guilt with the cats? Has society taught me to value masculinity so much more than femininity? Am I more comfortable making decisions based on wombs as they are my territory while Spike's testicles are from a mysterious world whose land I trespassed into?

Anyway. It is done now, and I will have to learn to live with my decision - as will Spike. I am sure I will find my conscience soothed when his empty pouch looks less like an angry swollen blackberry and his eyes look less woeful and accusing. In the meantime, in remembrance of things past I leave you with... Spike (August 2009). Babydog. 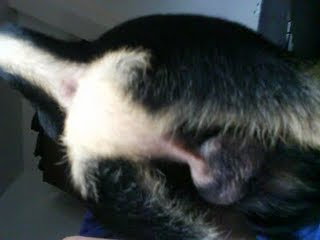