Back on the mat 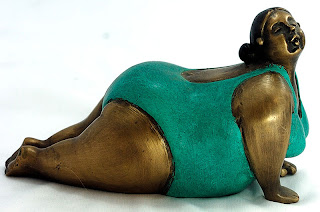 I must have started doing yoga at the end of 2006. Oddly enough I don't remember how or why I started or why, out of all the yoga studios in Bangkok, I chose Yoga Elements. I remember my first class though, it was with a young western guy whose name is lost in time (it wasn't Adrian, I didn't get to study with him until my yogic renaissance). All I remember of that first class was he asked how the breathing technique he had just taught us (which I now know is kapalabhati pranayama) made us feel. I shyly raised my hand and said it made me feel sparkly up my spine. He beamed at me as if I had said something wonderful and told us that this technique was in fact also known as 'shining breath' and thus began my suspicion that I am fact a reincarnated yoginni genius trapped in the body of a thirty-something overweight English woman.

I attended several classes and after a week or two persuaded Dom to join. This is officially where my yoga journey started because Dom is the teller of beginnings and thus the creator of them. Now I know enough about yoga and and about myself to know that is okay, but back in 2006 when Dom joined and fell in love his story dominated our practice for the first half of 2007 and it was also the tendency for his passions to somehow eclipse mine that caused the false end of our yoga practice in July that year.

But now, four years older, over 20lbs heavier, considerably stiffer and thankfully much wiser I am back on the mat. Luckily yoga is both a loving and forgiving mistress and she welcomed me with an open heart.