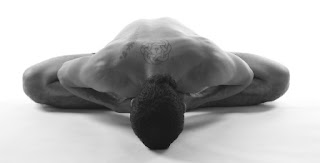 I really don't know enough about yoga to start critiquing teachers (and yet I know enough about yoga to resist critiquing teachers) but I just wanted to make a post about Mau before his classes fade a little from my memory.  Mau was a guest teacher at Elements through the month of July while Adrian and Shane went off and did cool things in foreign lands.  He had a slightly different style from many of the regular Elements teachers, some new ideas (often involving straps) and he led his classes with a warm, self-effacing manner that seemed quite precious as if it flowed from an abundant heart chakra.

I only had about three classes with him and he had dinner with Dom and I twice. Socially he was just the same, thoughtful and a bit shy, quick to laugh.  The least ego-centric yoga person I have met so far I think.  I also liked him because he was pleased to see me and didn't ask (if I was alone) where Dom was.   Dom is very out-going and charismatic, and in our small yoga society (the people we sip mint tea with) I must sometimes seem like Dom's wife rather than a person of my own.

Anyway, I will miss Mau and hope he comes back to Yoga Elements soon.
Yoga Yoga Blog