On having a day off (yoga) 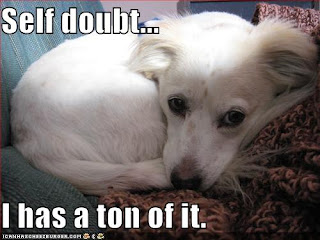 I had a day off yoga today, which kind of blew my intention to do a full week (ish Thursday thru Tuesday anyway)  but I learned some things anyway so it is all good.

First I learned that I worry over much about what Dom will think of me.  From the moment I decided not to go to my class (after the third trip to the toilet) to the moment I saw Dom (about two hours later) I worried that he would be disappointed that I had decided not to go to class. I spent that two hours continuously rolling his potential disappointment around in my head and making half-hearted attempts to counteract it from telling myself we would get to spend more time together and that would make him happy, to thinking how I could go shopping on my own to give him that hour and a half of 'alone time' that my skiving out of yoga class would deprive him off if it didn't (make him happy for those of you who can't follow a long sentence).

In the end? He walked out of his class and smiled and said "Decided not to do yoga today? That's fine love" and gave me kiss.

Realising that all my worries have been more weirdness of my own internal paradigm I examined them.  Basically it went something like: poor Yoga-God Dom stuck with lazy frumpy wife who can't even squeeze her fat lumpy ass into her lycra and do yoga three consecutive days without falling face down into a tub of full fat ice-cream and faking stomach-ache in order to sit on the couch for an extra 15 minutes in the morning. For the record, my stomach issues were genuine and I haven't had ice-cream in ages - but sometimes my self-loathing gets creative.

There is a lot there but basically my anxiety boils down to a feeling that I am Unworthy and yet oddly married to a man who is Uber-worthy and I am wildly imaginative when worrying what other people think. In fact not only do I do not need evidence that they are having negative thoughts about me I don't even need actual people; I can dedicate days to worrying about what hypothetical people are hypothetically thinking about me. Months.

Dom hates it when I am self-critical so I am now worrying that he will read this post and be disappointed.  I will let it be and trust that he will see the growth, the improved  self-awareness, and the honesty (beneath the gnawing self-hating anxiety) and be hopeful for me.