Something beautiful in everything 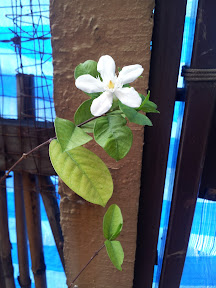 The demolition and construction next door has brought nothing but misery. At midnight a team arrived with the digger that would reduce the old house to rubble. Our fence all but fell down and we were left with no privacy and no security for two months until (again at midnight) a second team arrived to begin construction. We have just 22 more days to endure this as in March 1st we will move to another house in a new part of the city. Yesterday we were given some privacy at last in the form of a hastily erected canvas sheet between us and the site. It was a relief, and today it afforded enough peace and space for me to notice a small and fragile jasmine flower against the rotting concrete and florid blue of the canvas screen.
- February 04, 2013