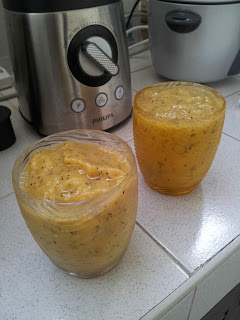 I used to be a Goddess.  Not a beautiful white-robed Grecian Goddess, or a multi-limbed, blue skinned Hindu Goddess.  I was black haired, foul-mouthed, sadistic Goddess of the Underworld named hirondelle (yes, lowercase, always).  I slaughtered many and maimed many more, but one of the few to lay a finger on me and survive (he stabbed me in the face and caught me so much by surprise I clear forgot to tear his head off) was the General of my very own Dark Oblivion Army*.

When he wasn't tearing the limbs off babies and plunging a dagger into my visage, he made smoothies.

It was a kind of hobby, General REM and his smoothies.  You could ask for anything and he would whip it up in seconds, no matter how exotic and fanciful the ingredients.

Dom and I have started making smoothies.  The two above, made yesterday morning, are passionfruit, pineapple and banana with a splash of mango juice.

And with every single smoothie I make, I think of the General.

*Before you call the police, or a psychiatrist - I was an RPGer

September 05, 2018
I was wondering, if you once blogged regularly do you always long for it? Time and time again I am drawn back to Imagine the North, although sadly - as the many false restarts will attest - I seem unable to capture the former magic.  I guess we have moved on (and away) from blogging.  The closest thing I have to it is Instagram.  Like ItN my Instagram account provides me of diary of partial highlights; but still, I miss the text, the insight (my own insight gained through the act of putting a thought into words, a small concept with a beginning, middle and end) and the comments from friends.

November 21, 2016
Today I am getting up close and personal with my self-help habit.  I have been looking for answers for years but seem no closer to finding them than when I first began to look.  Could it be that the search is futile?

March 08, 2012
This is my Gratitude Journal - every day I am supposed to write five things I am grateful for in order to remain focussed on life's positives.  I got the idea from a new (very inspirational and thought-provoking) friend on Facebook, Marike.

I am grateful for inspirational and thought-provoking friendships.
The journal is a lined exercise book with a firm card cover, wrapped in a really soft cloth that snaps shut with a very satisfying way.  The pen is a Cross and has my name engraved in the centre.  My husband bought me both for Christmas.

I am grateful for a generous and loving husband who knows not only that a pen and a journal will please me but also that having my name engraved on the pen and choosing a book wrapped in soft cloth with the perfect snap makes the difference between a wonderful gift and the perfect gift.
Did you notice that they are green?  I find myself suddenly smitten with green, he knows that too - it is a relatively recent love affair, but he picked it up qui…
5 comments
Read more
Pain heals, chicks dig scars, glory lasts forever.