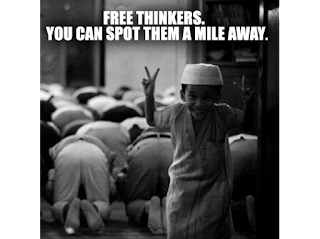 This is a version of an image I saw on Facebook. The original was a bit wider, showed more of the room and the guys at prayer.  I loved it immediately.  The kid's playful gesture and fun expression instantly transcends barriers of race and religion.  In fact this gorgeous little boy had a message for me that transcended the literal message of the text itself.
The original image had the text I included here but also had a logo bottom right which read "We fucking love atheism" showing it come from one of those rash of rationalist Facebook pages which glorify science and unbelief in any kind of God type person running the show. This Pinterest board is a very representative sample of their message if you have been in a cave for the past 18 months.
I edited the image because I liked the photo and the message I didn't wan't to align myself with that group.
I hope this little boy is a free thinker, and I hope those guys on their knees behind him are free thinkers too. But I am pretty sure the guy (or gal) who made the original image wasn't; because what is obvious to me, and to I think a growing number of people, is that these New Atheists force their 'bright' dogma down our throats with all the fervor of the worst kind of televangelist. They are the priests of a new religion that is crying (rather unoriginally) that God is dead. And they aren't the free thinkers they believe themselves to be.
Free thinkers know they don't know the truth, they are agnostic and at times full of doubt. They may express faith (as opposed to certainty) in some kind of Higher Power or they may lean towards the atheist side of the belief spectrum.  But importantly they know that they do not know the answers and therefore that the people who think differently to them have an equal chance of being right.
Free thinkers probably suspect that neither side (us or them) have come close and the truth and when it is revealed (however many millenia down the line when we are evolved and ready for it) will be more mysterious and beautiful and right that we could ever imagine.  And although they don't know, they suspect that the truth will have something to with love and tolerance and being compassionate and nothing to do with hate and opposition and being right.
Free thinkers realise we will learn the truth as soon as we no longer need it.

I have just read a beautiful book called Patience With God: Faith for People Who Don't Like Religion (or Atheism) by a free thinker called Frank Shaeffer.  Here are a couple of quotes from it:

The problem I have with the 'solution' offered by the more radical New Atheists... is that we are spiritual beings with or without their permission.
New Atheists pit religion's literalistic claims against their own literalistic claims.  In that sense the New Atheists turn out to be secular fundamentalists arguing with religious fundamentalists.
To me the secular and religious contenders seem to miss the reality of our actual condition: we are specks on our tiny planet and our concept of the truth, and time and space is related to our limited perspective.

It is a very inspiring book and just the perfect thing if you are looking for a way to have a little old-fashioned faith combined with a little post-modern uncertainty.
Atheism Faith Philosophy Religion